Electing our next leader as Lib Dems surge in the polls

Following huge successes in the May 2019 local election and Europe election, the Lib Dems have surged past the Conservatives to the top of the poll for a general election. Poll results may not be reliable, but there is no doubt the next leader of the Lib Dems will be one that cannot be ignored in Westminster. So who is in the frame to take over from Vince Cable in a few weeks? 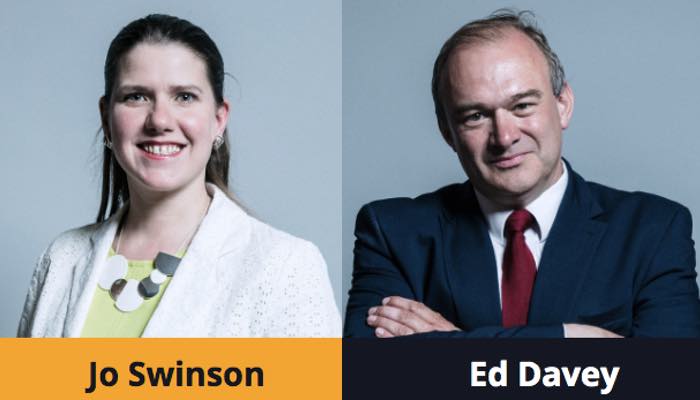 Jo Swinson is the party’s Deputy Leader and MP for East Dunbartonshire. As Minister for Employment Relations and Consumer Affairs in the Department for Business, Innovation and Skills, Jo delivered a fairer deal for workers and consumers. She is the leading Liberal Democrat in the People’s Vote campaign, building relationships with parliamentarians of all political stripes to keep the UK in Europe, and has been a major part of cross-party groups such as More United and Better Together.

Ed Davey is the MP for Kingston and Surbiton, where he first won in 1997. As Secretary of State for Energy & Climate Change he led the fight for more investment in renewable energy to tackle climate change. As a direct result the UK almost quadrupled its green energy and Britain became the world leader in offshore wind. Ed also led the way across Europe, successfully negotiating ambitious EU-wide targets to cut greenhouse gases and paving the way for the historic Paris Climate Treaty.